A major study released today in Fresno details the direct link between higher levels of air pollution and asthma-related ER and hospital admissions. So, what’s that got to do with climate change? Plenty.

“There’s a division in the public’s mind between global warming and health effects of pollution,” says Dimitri Stanich of the California Air Resources Board.

“Ozone has the same corrosive aspects of bleach,” explains Bonnie Holmes-Gen, senior policy director for the American Lung Association in California. “When people breathe it in, it damages the lining of the lungs. It’s like getting a sunburn on the lungs. It triggers coughing, wheezing and asthma attacks,”

Ground-level ozone is also a greenhouse gas. So, while it’s harming people today, it’s simultaneously helping to warm the planet. If that’s not enough, ground-level ozone’s corrosive properties harm crops, too. The Central Valley may be the nation’s salad bowl, but it’s ground zero for ground-level ozone.

Then there’s “black carbon.” If you think that sounds ominous, you’re right.Tiny particles of black carbon can lodge deep in a person’s lungs (bad) or circulate in the air and contribute to global warming (also bad). And, in a triple whammy, if black carbon particles land on arctic snow, they can accelerate the ice melt. Scientists say black carbon is a major contributor to climate change, perhaps second only to CO2. Black carbon comes from, among other things, the burning of fossil fuels, the stuff that comes from tail pipes and smokestacks.

Sunday’s New York Times featured a depressingly detailed account of Americans’ waning interest in global warming. Climate skepticism is on the rise, at least in political circles. While skepticism about the health effects of air pollution isn’t polled as much, it seems reasonable to think there’s little argument there.

This is where we get to what policymakers call “co-benefits.” Ms. Holmes-Gen points out that ground level ozone and black carbon are both fairly short-lived in the environment. “It’s a huge bang for the buck. If we reduce air pollution, we’ll see an immediate health benefit and we get warming pollutants out of the air, too.”

Lisa Aliferis is a health news editor at KQED. The complete smog & health study referred to at the top of this post is available as a PDF download from Fresno State University.

9 thoughts on “Clearing the Air on Climate and Smog” 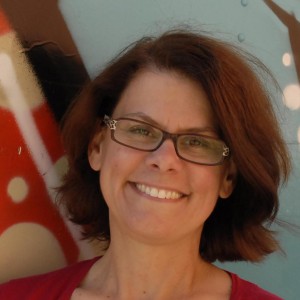 Lisa Aliferis is the founding editor of KQED's State of Health blog. Since 2011, she's been writing and editing stories for the site. Before taking up blogging, she toiled for many years (more than we can count) producing health stories for television, including Dateline NBC and San Francisco's CBS affiliate, KPIX-TV. She also wrote up a handy guide to the Affordable Care Act, especially for Californians. Her work has been honored for many awards. Most recently she was a finalist for "Best Topical Reporting" from the Online News Association. You can follow her on Twitter: @laliferis