These are Gold Rush days for solar advocates in the US.  Molly Sterkel, who supervises the California Solar Initiative for the Public Utilities Commission, jokes that she lives in fear that private industry is looking to poach her staff:

There’s a lot of people going to solar companies to work because it’s a really exciting industry. It’s growing so much in California, so it’s attracting some of the best and brightest. I’ve told all of my staff that they have to sign 10-year contracts to work for me but so far most of them have stayed because it’s a really exciting time to be in government, to be able to run the largest solar program in the country.

In 2002, California established its Renewable Portfolio Standard Program “…with the goal of increasing the percentage of renewable energy in the state’s electricity mix to 20 percent by 2017.” Then the Energy Commission bumped the deadline up to 2010, and the 2004 Energy Report Update further recommended increasing the target to 33 percent by 2020.

Whatever the deadline, numerous incentives and rebate programs funded by the state and utility ratepayers are fueling an explosion of solar.  Sterkel says it’s growing at a rate of 40-50% a year.

But installing solar is still not cheap. Even now, all the solar in California adds up to 350 MW (one big power plant generates about 500 MW).

In part, that’s because most of the people taking advantage of the subsidies are residential utility customers, and most of those are installing systems of 4 KWs. That’s not a bad thing, per se.  Any kilowatt that home doesn’t siphon off of the grid is a kilowatt that can be used elsewhere. But slow and steady is a little too slow and a little to steady for some. Never mind that California is way ahead of other US states.  That just makes it easier to compare us to other countries, like Germany and Spain, that have invested even more in solar.

There’s no argument it takes subsidies to make solar financial feasible.  The question for advocates and regulators alike is how much subsidy helps solar thrive without spurring a ratepayer revolt? And how long should those subsidies last?  A report from McKinsey & Co. concludes:

“…regulators must adjust incentive structures over time and phase them out when grid parity is reached.”

Grid parity is the point at which there’s no difference between the price of solar and the market price for (less environmentally preferable) “brown power.”
Sterkel says:

(That) is the point at which everybody gets solar. Just like there was a moment when everyone got a cell phone and everyone got a car. And this year, we’ve already installed more megawatts than we did in all of 2007, and we’re not even all the way through the year. The policies are all pushing towards solar. The businesses are growing. The venture capital is here. You know, all signs point to “yes” for solar here in California.

That’s even though incentive levels in California have been dropping.
Where’s it all going?  Some say we could see a repeat of the 1980s, when oil prices tanked after spiking and green energy projects went “poof.”  It took them well over a decade to begin the long, slow climb back to economic and political viability.  Oil prices appeared to be sliding after a long, hot summer in 2008–until yesterday, anyway.  But green advocates say they won’t be caught out in the cold this time around. That’s because renewable energy advocates can point public attention to something that goes well beyond consumer price protection: climate change.

Rachael Myrow hosts The California Report. She reported on rooftop solar installations for Climate Watch on September 23, 2008. Listen to her story here. 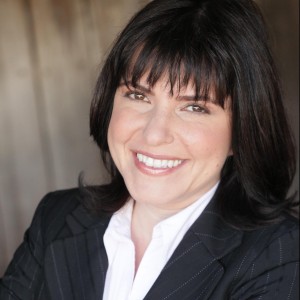 Before all this, she hosted The California Report for 7+ years, reporting on topics like assisted living facilities, the robot takeover of Amazon, and chocolate persimmons.

Outside of the studio, you'll find Rachael circling the Stanford Dish, and whipping up Instagram-ready meals in her kitchen.