Sierra Nevada bighorn sheep are animals worth seeing. With their bright white rumps and the rams’ remarkable headgear, they bound and leap over seemingly impassable alpine terrain. But you may have a tricky time spotting one–there are only about four hundred in existence.

A variety of factors have conspired to place this subspecies of bighorn on the Endangered Species List, but the most devastating is disease. Any contact with domestic sheep can lead to runaway outbreaks of scabies and pneumonia, infections for which the bighorns have no natural immunity. Their population low was about 125 animals in 1999–so today’s 400 is actually encouraging, if still too few for most hikers catch a glimpse.

But there’s one place you will soon be guaranteed to see a bighorn. On Highway 395 in the town of Independence, starting on October 23rd, artist Jane Kim will paint the growth stages of a ram on the side of the Mt. Williamson Motel.

Kim’s background is in fine art–she holds a BFA from the Rhode Island School of Design–but in 2010 she re-invented herself with the Science Illustration Program at CSUMB. “I was a little intimidated that I didn’t have any background in science at all,” she confesses. “But I always, always, always loved, loved, loved the natural world.” This enthusiasm, along with her considerable artistic skill, has helped Kim land numerous commissions, from illustrating a new fish species to contributing to the Handbook of Bird Biology. These pieces are currently on display at the Bone Room Presents in Berkeley, though the focus of the show is the artist’s work on bighorn sheep.

Kim fell in love with Sierra Nevada bighorns during an internship at Yosemite National Park. Shortly afterward, she had the idea of painting them as murals and began to investigate possible sites. “I got a lot of no’s,” she says. Finally she found an abandoned garage in Independence, and walked into a motel across the street to ask about it. When she explained her project, she says, the motel owner gasped, “Oh, the mountain sheep, they’re so important! You must paint the mural here.”

So Mt. Williamson Motel became the location for the first mural, and Kim put up a Kickstarter project to fund it. Amazingly, she raised $20,000 in a matter of days. In the two weeks left before the project’s deadline, she hopes to continue raising money for the other three murals.

Painting the side of a building is quite an artistic accomplishment, but that’s not enough for Kim. “Science illustration gives the art another layer of purpose, of meaning,” she says. The bighorn murals are meant to introduce viewers to this little-known animal and gain a broader base of support for their ongoing conservation.

Next time you find yourself in the Sierras, scan the high, open, rocky areas for one of the world’s four hundred Sierra Nevada bighorn sheep. If you don’t see any, you can console yourself by driving by one of the Migrating Murals.

Or just visit the Bone Room, where Kim’s sheep and other artwork will be on display until October 30th. 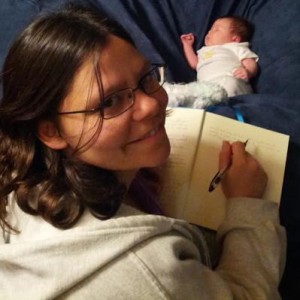 Danna Staaf is a marine biologist, science writer, novelist, artist, and educator. She holds a PhD in Squid Babies from Stanford and a BA in Biology from the College of Creative Studies at the University of California, Santa Barbara. She helped found the outreach program Squids4Kids, illustrated The Game of Science, and blogs at Science 2.0. She lives in San Jose with her husband, daughter, and cats.