Twenty years ago Carlo Petrini, founded Slow Food in an effort to resist McDonalds efforts to erect the Golden Arches in one of the most historical areas of Rome. Since then Petrini’s work has spawned an international movement aimed at overhauling global food systems that he says are unhealthy and way out of balance. Petrini gave an impassioned lecture at U.C. Berkeley Tuesday night. While he spoke in vivid Italian, food writer Corby Kummer interpreted. Petrini seemed the perfect choice to inagurate the first class of Edible Education 101: The Rise and the Future of the Food Movement. The course is being co-taught by J-school professor, and author, Michael Pollan and Executive Director of People’s Grocery in West Oakland, Nikki Henderson. The premise of the class is that food is political. Students and members of the public are given a chance to explore pressing issues such as food access, distribution and nutrition.

Student enrollment for the 13-week course filled up within minutes. The popular classes are also being offered to the public, free of charge and Bon Appétit Management Co. (BAMCO) is sponsoring the webcast on YouTube. In the audience Tuesday night were freshman Bridget Smith and Sarah Branoff. They said they are taking the course because, as undergrads, they don’t usually get a chance to take a journalism class at Berkeley. They both like food and baking and have never even heard of Alice Waters. Waters’ Chez Panisse Foundation is helping fund the class. David Park is a Venture Capitalist from Foster City. Park, who puts together health and wellness portfolios, says he is always on the lookout for who to hire and who to fund in the food and nutrition arena. Claudia Weisburd, another member of the public, is interested in how the course promises to integrate environmentalists, social justice activists and foodies.

I’m used to seeing these rock stars of the food movement on TV talk shows and not a scuffed up college stage in front of a white screen with no graphics but somehow Petrini kept everyone’s attention. The International Slow Food founder talked about how there are two worlds, one where people get too much to eat and another that doesn’t get enough to eat. He talked about gastronomy and how recipes are only one small part. Agriculture, anthropology and political economics are all part of gastronomy. What Petrini wants to do is fix the bad parts of the engine of gastronomy. He said right now, around the world, one billion people are suffering from hunger and in the U.S. we are throwing away twenty-two tons of food a day. For many of us with access to food, we have become locked into diets that are making us sick. Petrini says if you understand food politics you can help create change.

Here are some new paradigms he mentioned:

The goal, says Petrini, is a world in which we stop consuming so much but also help those struggling so that they can have more. Petrini told the audience consuming less doesn’t mean you will be less happy. “You will be more happy,” he said.

Next week’s class, which is already filled up, features film and theater director Peter Sellars. He will be discussing Food as Culture: the role of culture and the arts in deepening and strengthening the social and political roots of the food movement. Originally published on Bay Area Bites. 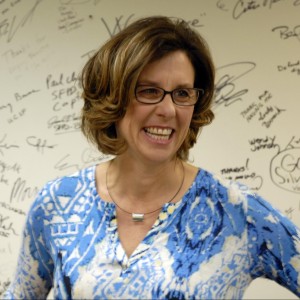