A replica of “Lupe the Mammoth”. The bones of this juvenile Columbian mammoth were found along the Guadalupe River.

“This has been my first experience working with the Children’s Discovery Museum, or any other museum, in developing an exhibit,” says Kaitlin Maguire, graduate student at the UC Museum of Paleontology.

She’s been working with the Children’s Discovery Museum (CDM), for the past two years as a consultant for their upcoming exhibit, Mammoth Discovery!, that opens on Saturday, June 11th. The exhibit features a replica of the full skeleton of a juvenile Columbian mammoth, Lupe, named after the Guadalupe River where she was found.

“I was brought in to provide the content about mammoths and the history of San Jose during the Ice Age. And so my role has been providing information to the staff here so that they could create the exhibits. That includes little things like what was the vegetation like during the Pleistocene to how old Lupe was, how big [she] was. And also helping with brainstorming to fabrication.”

Kaitlin also led the staff on three trips to give them an idea of how a paleontologist works in the field.Two of the excursions spanned the coast from San Francisco to Santa Cruz, where they examined invertebrate fossils, such as shells, and also vertebrate fossils, such as whales and seals and sea lions. They also traveled to Del Puerto Canyon for their third field trip, where they studied terrestrial deposits, or land deposits, that contained fish and plant material. “On each of these field trips, I showed the staff the tools that I use: hammers, picks, notebooks. I also taught them the geology of the area, so they understood the rocks that they were looking at. And I taught them about the animals that they were looking at. In addition, I showed them the proper way to collect a fossil, proper way to document it. Basically everything from start to finish.”

She’s learned quite a lot from her experiences of working with CDM. “It’s been an incredible experience to understand how an exhibit is built from the brainstorming phase all the way through to fabrication, and the amount of thought to detail, the amount of testing that’s required. I will never go to a museum again and not think twice about the amount of work that went behind building that exhibit. I also have a really, a great appreciation for this museum in keeping everything accurate and unique and true to the story that this mammoth provides us and really staying true to the evidence that is provided by the mammoth and creating a wonderful experience for the children.”

Watch “Science on the SPOT: Lupe the Mammoth Comes to Life” on QUEST.

Note: In the video, Kaitlin says Lupe is between 2-3 years old. To clarify, “She’s older than 2 or 3 years old but probably not older than 10. Paleontologists are not sure of her exact age but do know that she was a juvenile.” 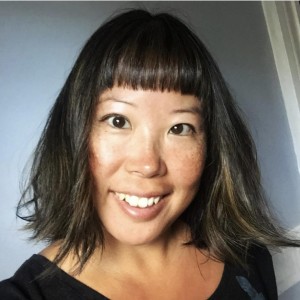 Jenny is currently a Digital Media Producer for KQED Science's Deep Look online video series. She was also a long-time contributor to Bay Area Bites, KQED's popular food blog. Jenny graduated with honors from New York University’s Tisch School of the Arts Film and Television program and has worked for WNET/PBS, The Learning Channel, Sundance Channel, HBO and the University of California.