Stanford researcher Zhenan Bao is on the quest to develop “super skin” that could help us detect disease and other biological functions.

Bao’s built a flexible sensor that is so sensitive to pressure it can feel a fly graze down on it. Bao is now working to have this artificial skin be able to detect chemicals and other biological functions that would otherwise go unnoticed. The skin will eventually be solar powered, using super stretchy and durable polymer solar cells that generate electricity.

“You can imagine a robot hand that can be used to touch some liquid and detect certain markers or a certain protein that is associated with some kind of disease and the robot will be able to effectively say, ‘Oh, this person has that disease,'” Bao told the Stanford Report. “Or the robot might touch the sweat from somebody and be able to say, ‘Oh, this person is drunk.'”

The “brain” of the artificial skin is a flexible transistor. The skin is touch sensitive due to the transistor containing a thin, highly elastic rubber layer, molded into a grid of tiny inverted pyramids. As pressure comes down on the transistor, this fine layer changes thickness, altering the current flow through the transistor. The sensors have from several hundred thousand to 25 million pyramids per square centimeter, corresponding to the desired level of sensitivity.

In using the super skin to detect a particular biological molecule, the surface of the transistor has to be coated with another molecule to which the first one will bind when it comes into contact.

“For any particular disease, there are usually one or more specific proteins associated with it – called biomarkers – that are akin to a ‘smoking gun,’ and detecting those protein biomarkers will allow us to diagnose the disease,” Bao said. 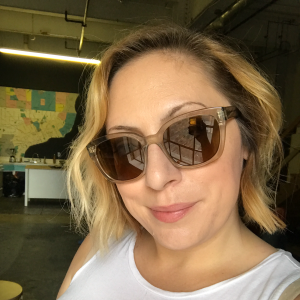 Laura is a marketer by day and nerd by night. She's the Chief Nerd Herder for Dorkbyte, a blog devoted to art, technology and science. She's been named one of the most engaging women to speak about technology and has been featured on The Setup. A member of Noisebridge, she is working on two robotics challenges, leading a puzzle team that competes in a variety of puzzle challenges throughout the US and monkeys around on ham amateur radio. She loves astronomy, Making and hardware hacking. She was most recently involved in teaching hardware circuitry at Maker Faire.Laura has executed marketing strategies and campaigns for tech startups in the Bay Area. Her work with social media has been inducted into the Viral Marketing Hall of Fame.