Mapping of the underwater topography (called bathymetry) reveals landscapes fundamental to understanding the Bay Area’s unique geology. The Golden Gate strait connects the San Francisco Bay to the open Pacific Ocean and is only one mile across.

Although the tidal range in the Bay Area is not incredibly large, the narrowness of the Golden Gate creates a funneling effect: The image above (from Cal State Monterey Bay) is a perspective image looking towards the east. The colors represent water depth with the reds and yellows as shallower water and the blue and purple deeper water. The prominent patterns in the foreground might look like ripple marks on the beach, but these sand waves are similar in scale to some sand dunes seen in deserts — up to 30 feet tall and more than 700 feet from crest to crest.

The vigorous currents funneled through the Golden Gate continuously move sediment from underneath the bridge where it accumulates as these sand waves. But remember, this is a static snapshot of very dynamic systems. I’d love to see multiple repeat surveys that show how the field of sand waves change over time.

Learn more about the processes that move this sediment from this USGS article and in this SF Chronicle piece from 2006, along with this QUEST story on 3-D seafloor mapping. 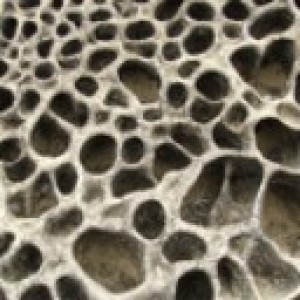 Brian Romans is the author the popular geoscience blog Clastic Detritus where he writes about topics in the field of sedimentary and marine geology and shares photographs of geologic field work from around the world. He is fascinated by the dynamic processes that shape our planet and the science of reconstructing ancient landscapes preserved in the geologic record. Brian came to the Bay Area in 2003 and completed a Ph.D. in geology at Stanford University in 2008. He lives in Berkeley with his wife, a high school science teacher, and is currently working as a research scientist in the energy industry. Follow him on Twitter.