The intertidal rocks at Natural Bridges State Beach are covered in life: sea stars, seaweeds, urchins, and crabs are just some of the area’s intertidal inhabitants. Visit them in their tidepool homes down in Santa Cruz, California.

Wi-Fi access available with wireless enabled laptop computers or personal digital assistants (PDAs) to access the Internet. Park visitors will be able to gain Wi-Fi access when they use a wireless device within about 150 to 200 feet of the Visitor Center in the park.

Special thanks to John Pearse, Professor Emeritus at University of California Santa Cruz Institute of Marine Sciences and the LIMPETS monitoring program, as well as the Exploratorium’s Mary Miller for their participation.

Craig Rosa, Jennifer Skene and Lauren Sommer of KQED contributed to this Exploration.

In the rocky intertidal zone along the coast of California, you are a giant. As you walk out on the rocks during low tide, your huge feet dwarf the intertidal’s tiny inhabitants. With one sweep of your eyes, you can look at an entire ecosystem.

As the rock slopes from the land to the sea, there is a steep gradient in environmental conditions. High on the shore, organisms spend most of the day exposed to air. Closer to the ocean, organisms spend most of their time submerged in water. These differences in the environment set up the intertidal zones. Different species inhabit these different zones. Evolution from the Oceans

All of the major branches on the tree of life originated in the ocean. And descendants from most of those branches can be found in the intertidal zone of today: seaweed, sponges, sea stars, mussels, crabs – each represents a different evolutionary lineage.

The brown algae group includes the giant kelps that live just offshore, as well as tiny diatoms. The red algae group includes a seaweed familiar to sushi lovers, called Nori. This seaweed is common on the California coast. The green algae group contains Ulva, a bright green, sheet-like seaweed that grows on rocks and on docks in marinas. Away from the ocean, mosses, ferns, conifers and flowering plants evolved from the humble green algae.

As the climate changes, so does the intertidal Intertidal inhabitants are being affected by climate change; there is evidence that the geographic ranges of many species of invertebrates have shifted further north, just since the 1930s. And one species, the Volcano Barnacle (Tetraclita rubsecens) has shifted just within the last 20-30 years. Prior to 1980, it was never found north of San Francisco. Today, this barnacle clings to the rocks as far north as Oregon. Some species can move north in response to climate change; other species can’t. These organisms live on the edge of the land and the sea, and have to deal with climate change in both those realms.

Join the Natural Bridges State Beach photo group on Flickr to share your photos of this amazing place. 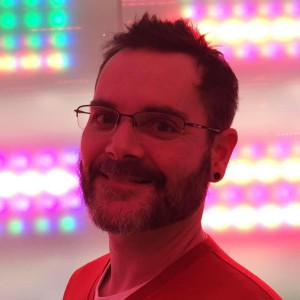 Craig Rosa is KQED's Senior Digital Editor for Science. Additionally he serves as the Series Producer for the Webby award-winning science & wildlife video series, Deep Look, presented by PBS Digital Studios. Prior to joining KQED in October of 2006, he spent 11 years with The Tech Museum of Innovation in San Jose, where he worked to create innovative educational visitor experiences online and within the museum space. He was also responsible for the museum's Information Services operations. He began his informal science interpretation career at the Brooklyn Children's Museum as an Assistant Exhibit Developer and Greenhouse Program Coordinator. Craig has a B.A. in World Arts and Cultures from UCLA, and an M.A. in Performance Studies from New York University.