Far too many of our secondary students struggle with depression, suicidal thoughts, anxiety and isolation. In my eight years of teaching high school English, I have found more of my time on campus invested in the mental and social health of my students. At Dublin High School (DHS) in Dublin, California, the students have decided it is time to address the elephant in the room. Junior Matthew Kang, along with a small group of students on the DHS campus, started the Elephant in the Room Project because he ultimately “envision[s] a positive community of open-mindedness at Dublin High where all students can feel comfortable sharing their stories and feel a sense of unity in the common emotions we experience as high school students.” Intrigued by the movement on our campus, I reached out to Kang and attended the first informal gathering which hosted over 120 students and staff members.

Q: What was your inspiration for this movement? How did it materialize?

A: My motivation to act came last summer when a former DHS student took his own life. He was a teammate of mine on the track team who I had known since middle school, first as competitors and later as a friends. His suicide shook me and his friends considerably. No one thought that anything was troubling him, and we could only question if things could have been different if we were there for him. It was then I wondered if he had people around him that he could talk to or could relate to. This thought began to materialize into Elephant in the Room, organized gatherings where students have a place where they could hear the voices of their peers publicly and anonymously. Elephant in the Room is an opportunity for students to share their personal stories, experiences and views freely in a safe environment. Through listening to each other, I hope students who feel isolated can relate to their peers.

The goal of the movement is simple, but, improving and supporting teenage mental and social health is a huge undertaking. To aid in the growth of the project, Kang and the Elephant in the Room team created stickers and joined a hashtag campaign #YouCanTalkToMe to raise awareness and reach out to those needing support.

Q: Why did you think that the best tool for your project was social media and the hashtag #YouCanTalkToMe?

A: One thing with DHS students, or maybe all high school students, is that we always have our hands on a phone. You won’t see anyone in high school without a phone and some form of social media. We are living in the age of social media; it’s just how we communicate. So for our project, this was the most effective way to get our message across. It was through social media we were able to get such a great turnout in our inaugural Elephant in the Room gathering. Two days of posting is all it took to get the word out. It truly is a powerful tool. Q: Were you inspired by any other social media awareness campaigns or specific hashtags?

A: Absolutely. Social media has a way of getting people’s attention, and you see the influence it has everyday. One example that comes to mind is the popular hashtag #MeToo in 2017. The tweet went viral with 19 million retweets and promoted a global movement of men and women sharing their stories of sexual abuse and harassment. An older viral hashtag that I shared was the #ALSIceBucketChallenge. It’s amazing how a simple hashtag can have such profound effects. Although we do not expect to go as viral as these iconic hashtags, we hope to use the social media hashtag to inspire other DHS Students, and even other high schoolers, to join our cause: to spread open-mindedness in schools, to share our stories and to ultimately form a more cohesive, positive community where our peers won’t feel as alone in their personal struggles.

Elephant in the Room is truly a youth movement. While teachers and counselors have been integral to support the movement by coordinating, advertising and supervising get-togethers as the group formalizes their club charter on campus, it is the students who have developed the concept and are moving this project forward. DHS is developing a Wellness Center on campus, and when the center opens next school year, Elephant in the Room will make this space feel more student-owned.

Q: In what ways does the movement elevate youth voice?

A: There are many times where youth voice is dismissed and discouraged and I hope that this movement is able to amplify our voice. What I mean is that our social campaign addresses youth problems. It calls for students to speak up about issues that are unique to us rather than having adults dictate and define what they are. I hope that by creating this kind of forum, where discussion about difficult subjects and feelings is actually encouraged, we may send a message to all youth that your voice matters and that no one should be able to tell you otherwise. Everyone should be able to hear your voice.

DHS is focusing on social emotional support on campus to create a more positive and inviting environment for students. The addition of the Wellness Center is taking steps toward that goal, but the students wanting a more positive space and culture on campus is ultimately what will bring change to the campus.

Q: What is your ultimate goal for the movement? And how will you measure its “success”?

A: I would love for this to be a consistent venue for students to share their stories with others. For students to have access to people that they can speak with about anything, whether to vent, debate, speak about nothing in particular or talk about something serious. Finally, I hope this movement will allow students to get immediate professional help when they need it, and to make more connections and friendships. As for success, I’m not sure how I would define it, but if this movement … can reach at least one person and make them feel a connection to others in a positive way, then I think we are successful. This partnership of high school staff and students is gaining support. While the Wellness Center and Elephant in the Room are not fully in use on campus, the students have spoken: they are reaching out to one another to support, empower and empathize with one another. They are communicating in person and through social media that depression, anxiety and isolation exist on our campus and that we can work together to build a more positive, inclusive and safe environment to support our youth. With the use of the hashtag, hopefully the movement will spread and unify our youth to communicate their feelings and experiences in order to lift one another up. As a teacher, I am proud to partner with my students to build a more positive environment on our campus. 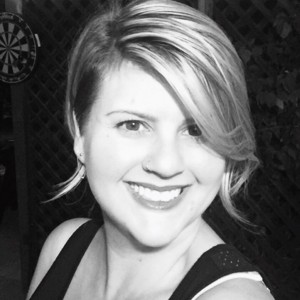 Erin Vallejo is a Google Certified Educator, EdTech Teacher Leader and CUE Rock Star Teacher who teaches Sophomore Advanced English in Dublin, California. In addition to teaching English for the past eight years, Erin is also the Technology Coordinator for her high school, a Freshman Mentor Program Adviser, and the adviser for campus clubs such as Room to Read and Northern California Innocence Project. When Erin is not teaching, she enjoys traveling, spending time with her family and presenting at education conferences.