As I read the final sentences of their project-based essays, I realized why I became a teacher.  This moment erased all of the stress I had experienced from trying to provide my 13 to 17-year-old students with meaningful and effective classroom experiences while resources were cut year after year from an already bankrupt district. Instead, this moment replaced that stress with an infinite amount of hope and endurance. We were doing our final presentations, which were a culmination of the previous six weeks of studying indigenous forms of healing. Over the course of the unit, we had listened to three guest lecturers. A colleague came and talked with us about the Dakota Access Pipeline, showing us a slideshow with video footage of their experience in South Dakota. We welcomed a Ph.D. student from UC Berkeley, who shared audio of her work in gathering oral testimonials from Peru’s Amazonian medicine doctors. We also engaged with a local advocate for land and cultural reclamation, who shared pictures about the history of land colonization in the Americas before we planted our own non-GMO seeds and made indigenous foods in the campus garden.

The students I work with are all Newcomer students, meaning they are recently arrived refugee students who came to the U.S. within the last three years. Many of our students arrived less than a year ago and have little to no English language skills. They are below grade level in literacy and have never seen, let alone used, a computer before. While the multimedia formats of our guest lectures may seem basic as someone who grew up with access to computers since childhood, over the course of the visits I realized just how impactful the video, audio and visual imagery was for my students. They were able to see and hear from places as distant as the Amazon, from centuries past and from various perspectives. Many of our students of Mayan descent shared about the confidence they gained in doing this project. They appreciated the technology, which gave them witness to the effect of indigenous healing through plant-based medicine, strengthened their ties to the land and cultural practices, and gave them comfort in being seen.

The final project included an in-class, 30-minute group presentation along with a final essay that described the unit and how it affected them. Students had a choice to present on the themes of indigenous food, oral testimonies or visual representations, all by integrating either a google slides or poster presentation and including photos. After a full week of supporting the technological aspects of students’ presentations, I began to wonder if I was asking too much of them. Some of the students were also in my elective computer class, so I expected them to be able to integrate the use of cameras and other audiovisual equipment to finalize their projects. However, for students in other classes (including some of my most recent students who may have arrived in the last few weeks), I began to wonder if I was creating a system of disadvantage and inequity. How could I require their presentations use technology if some students had never even seen a computer before? When the final presentations commenced, I knew that students had not only understood what I was asking, but that they understood why. As group by group presented, I was blown away by the level of ease in which they maneuvered the technology, and by how they used it to express what these last six weeks meant to them. Students reported how their grandmothers described the traditional Guatemalan huipil and its importance to continuing the Mayan legacy. Groups engaged in food presentations and shared with the community delicious snacks like baleadas or cauliflower ceviche. Through photo collages, others showed quinoa bowls and other indigenous food and described how they felt connected to their ancestors when preparing meals like these together.

In the same way our guest presenters had made their experiences come alive, students were giving our class community a glimpse into their lives through the integration of digital media. I got to see the face of my student’s uncle, who I learned was a master farmer in their home country. I learned that one of my students was apprenticing to be a curandera, or medicinal doctor, before she came to the U.S. I heard the testimonio of another student’s aunt, and got to see a typical example of traje, or traditional clothing from the student’s village. Through the use of technology, not only did we experience learning in a different way, we actually began to create a trusting community with each other. For once, we saw each other as not just members of a thriving school environment, but also as descendants of strong and diverse communities.

When I read the final essay of a group whose presentation used the format of a Gallery Walk, a set of photographic depictions of our previous activities, I began to tear up. Reading about the effect of the project shifted my attention from the arduous work of final grades and end of the year anxiety to instead loving my students and my work more than I ever had. When I saw student responses that included deep reflection and acceptance for who they are, I knew that I had served my students well and that we would always remember our time as a community together. At this moment I realized that regardless of the beginner level technology skills students had, they are the experts of their own experiences, and technology had simply been a tool to acknowledge, express and enhance their infinite abilities.

If you want to learn more about how to use digital photography in your classroom, take our free, online course Communicating with Photography on KQED Teach. 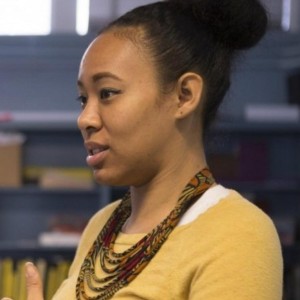 Acacia Woodschan is a Bay Area native currently supporting 9th grade Newcomer students at Castlemont High School. In her third year of teaching Ethnic Studies, she has learned the positive impact of technological integration into her classroom, allowing student's imaginations to explore history in a way that extends beyond textbooks and asks them to see themselves and their own histories as the intricate fabric of collective knowledge. She has utilized KQED platforms for student inquiry and is excited to be a contributing teacher in Technology in the Classroom. For information on how she integrates technology into her ELL classroom, please contact her at acacia.woodschan@ousd.org