When my school went one-to-one with iPads five years ago, I was most excited about the opportunities it could open up for my students to create for authentic audiences. At the time, I was teaching senior literature, writing courses, and a speech class. I couldn’t wait to see the possibilities this new technology held for my students.

This experience turned out to be more like navigating a wide open road that looks thrilling and inviting, but eventually fizzles out in a dead end. My students wrote and created many different products: websites, digital posters, blogs. These projects were easier with the iPad, to be sure. The authentic audience piece, however, was where I found myself hitting that dead end. Websites were viewed only by me. Blogs were viewed by other students in the class, and maybe an interested parent here or there. Often, it felt like we were creating flashier versions of papers and bulletin boards. My students were learning and creating, but they were not reaching the authentic audience I had envisioned.

And so, I worked tirelessly to tackle this issue head on and solve it, devoting all my limited free time to finding a solution… yeah, right. Every teacher reading this knows I’m joking. As much as I wanted to solve the “authentic audience” puzzle, I didn’t devote all my spare time to solving it. I moved on and accepted that this was how it would be. At least my students were getting use out of this tool and the administration seemed happy with my teaching. The authentic audience piece was more of a personal goal, so, like many things in my teaching that were not mandated, it was brushed to the side.

Then one day, at a baby shower, I was talking with another teacher friend about teaching, which of course thrilled all of our non-teacher friends who swiftly found other subjects to talk about. Left to our own devices, we soon found ourselves discussing our two very different, but in some ways still similar, situations. She was teaching kindergarten at a school about twenty minutes from mine. I was currently teaching sophomores who were struggling readers. It was my first year working with this population and I was struggling to motivate them. My friend was looking to introduce more positive role models into her kindergartners’ lives.

“What if we introduced our classes?” she suggested. “Wouldn’t that be cool?” We agreed that it would be very cool, but what would be the goal?

I had recently finished my masters degree in reading and literacy, and had often researched, discussed and studied the benefits of writing and reading children’s books, even for high school students. Together, my friend and I decided that it would best fit our curriculum if my students wrote children’s books to her students, who were just learning to read. We took some time to establish the relationship between the two classes by having the students write letters to each other. Then, my students set to work.

At this point it was March, in Chicago. It was cold. It was dreary. My sophomores had been struggling with motivation since the beginning of fall semester . This should have been the low point of the year. Only… it wasn’t. The idea of writing for a person, a real live person, had breathed new life into the writing process. Here we were, using the iPad again, but this time with a concrete audience in mind. The students were even able to customize how they created the books: some used apps like Book Creator or Google Slides, others used outside websites such as My Storybook, Story Jumper and Storybird. Students were using powerful apps and websites to create beautiful books, but more importantly, they were really thinking about who would read their work.

“Do you think my student would like this picture?”

“Would this make sense to a kindergartner?”

“I can’t wait for my student to read this part!” My favorite experience occurred with two students who were native Spanish speakers. My friend told me she had a student who was shy and embarrassed about her lack of fluency in English. My student, in contrast, was very proud of his ability to fluently speak Spanish and to excel in higher-level Spanish classes. However, English was definitely not his favorite subject. He didn’t love writing. But when I asked if he could write in Spanish for this little girl who was still learning English, his face lit up. He carefully crafted a beautiful book, written all in Spanish, which was a fairytale. I had never seen him work so hard on a piece of writing, and actually enjoy it.

My students were thinking critically and carefully considering their audience. As an added bonus, I found that students who pretty much never handed in work worked hard on this assignment and completed it. As it turned out, the image of a heartbroken little kindergartner who didn’t receive a book was much more powerful than the threat of a bad grade. And watching my students act as role models to awestruck kindergartners who were so honored that a cool, older student had written a book just for them was one million times more powerful than seeing a comment on a blog. The experience was one that will always stay with me as the moment when I realized that the best way to use digital tools was to remember the human element. The internet seemed to hold limitless possibilities for publication to an authentic audience, but it turned out that using digital media as a tool to connect with a real, live person was much more powerful. 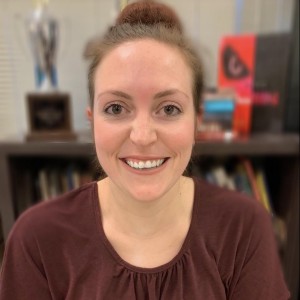 Samantha Paoletti is an English teacher and Reading Specialist who teaches in a private school on the south side of Chicago. She currently teaches a World Literature class for students with learning difficulties and a public speaking course. Her favorite part of her job is coaching a competitive Speech and Acting Team. Her educational philosophy centers around encouraging students to find what they are passionate about while writing and creating in real world situations.