Last year, I applied for and received a full set of Chromebooks for my 11 and 12th grade English Language Arts classes. To get ready to use the Chromebooks on the first day of school, I attended several professional development days during the summer at the district office.

As excited as I was to provide my students with an opportunity to use these new computers,  I was also a little apprehensive: Chromebooks are great educational tools, but they’ve got to have an internet connection to be useful—and what if the school’s WiFi connection didn’t work well? What if the WiFi didn’t work at all? How could I teach a Chromebooks-based lesson without using the Chromebooks?

I began to consider whether or not to plan two distinct, separate lessons—one with the Chromebooks and one without. I saw one of my favorite tech coaches in the teacher’s lounge. With some urgency, I asked, “What do you think? Should I have the kids use technology tomorrow? Or, should I wait and see how well the WiFi is working? Should I make copies of the lesson just in case?”

His answer was interesting: “So what if the WiFi is spotty, or doesn’t even work at all? It will still teach your students resilience, patience, and problem-solving. All very important skills to have.”

Hmmm, I thought. That’s not really an answer. “Should I make hard copies of my lesson just in case?’’

I decided that I would take my chances with our iffy WiFi and use my Chromebooks on the first day. And. The. WiFi. Didn’t. Work. The connection was spotty. The kids were frustrated. I was frustrated. We managed to get through the lesson, and I decided to try our luck again the next day. Again, we had trouble with the WiFi, and the parts of the lesson that I had thought should take minutes took the whole period. My colleagues clicked their tongues at me on their way to the copy room: “The WiFi doesn’t work here; that’s why we don’t use the technology. Not until the districts gets it to work properly, at least.” When I mentioned the fact that my classes had new Chromebooks and a chance to use the internet, my colleagues shook their heads and said they were going to wait to test out technology in their classrooms—because of the poor WiFi connection.  Nearly everyone agreed that it was better to do things the old-fashioned way—with paper tests, homework, lessons, and textbooks—than to experience so much frustration trying it the new 21st-century way.

As the year went on, the WiFi  got more consistent. When I reflected back on the successes and failures of the year, I was glad that I had decided to jump right in with the new technological opportunities, rather than wait. My students learned a ton that year, but the thing that stands out to me is the way they learned to deal with challenges regarding technology. Instead of immediately giving up, blaming a device, or deciding that there is something wrong with themselves—saying, for example, “I’m just bad at using technology,” or “I just don’t know how to use this”—they persevered through their challenges and simply tried again. They tried workarounds. They used their phones instead. They looked to each other. They reset devices and connections. Whatever they tried, they kept trying. And eventually, they figured it out.

One student in particular learned to deal with his own frustration. At first, every time the WiFi didn’t work, he would get angry. We’re not talking frustrated or irritated here—we’re talking angry. He would fold his arms across his chest and refuse to try any of my suggestions. He would leave class, and eventually tried to drop out of it. He believed he was failing because he didn’t like technology, and that he couldn’t learn to use it. Everyday though, I tried again. He tried again. And eventually, he actually began to be more patient with himself and with the technology. By the end of the first term, his grade was up and so was his mood. He had learned resiliency, and he had learned he was capable of “working” even when the WiFi connection wasn’t.

We can point to and measure student success in many ways — through test scores, writing skills, the number or kind of books they’ve read — but I am most impressed with the success my students had last year because they learned to cope when technology failed.

This year, the WiFi works almost everyday so, for the most part, my students haven’t had to learn how to get over being frustrated because the WiFi doesn’t work. They seem to be ready to figure things out on their own, and with a good WiFi connection, I can see that right away in the more traditional methods of measuring student success. Most of them used technology in at least one of their classes last year, and those who didn’t still seem to be willing to ask for help. Of course, I have a few that are like that particular student from last year—inexperienced and frustrated with technology and apt to blame their challenges on a personal inability to use technology. Thankfully, this year it is only a handful of them, and more importantly than anything else, I saw that my students could be relied upon to succeed with or without the WiFi’s help. 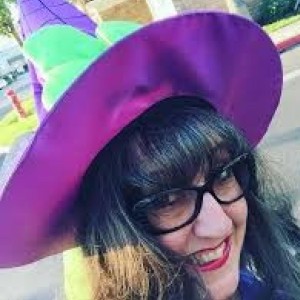 Throughout the course of her twenty years of teaching, Darcy Salvadore has taught all levels of high school English. Currently, she teaches at Los Osos High School in Rancho Cucamonga, California. She puts her students in the driver’s seat of their education and views herself as a facilitator of learning rather than a dispenser of information. She is involved in instructional leadership on her campus and in her district. Darcy is part of the original cohort of Technology Lead Teachers and she presents on using social media as an instructional tool, among other technology based topics, at her school, district, and beyond. Darcy uses KQED Teach resources in her classroom to build social and media literacy, improve reading and listening skills, and to help her students become creators of media rather than consumers.