It was only about ten years ago that podcasting was a little-known medium–the new version of ham radio for nerds who wanted to talk about last night’s episode of Lost or their affinity for the independent music scene. But nowadays every major media outlet seems to have a podcast or two. Since the explosion of Serial a few years ago, more and more English teachers are bringing podcasts into their classrooms as a new way for students to experience narrative. And, as an added bonus, help them hone their critical listening skills while trying to tackle the new Common Core listening components.

Three years ago, I too began incorporating podcasts into my classes. Soon, I found that newsier shows–This American Life, Code Switch, The Daily–helped my students stay informed and improved their writing. I was teaching an AP English Language and Composition course and noticed my students lacked real-world examples when writing argumentation. They lacked examples because their overachieving teenage lives didn’t allow them to sit down and watch the PBS Newshour or read daily headlines. Instead, they were doing hours of AP homework and planning the Winter Formal and going to football practice. Not only did I want them to have well-developed, relevant examples for their papers, I also wanted my students to be informed about what was going on in their country and the world. I felt  this authentic interaction with the questions and controversies of current events would enrich their writing, our discussions, and ultimately, their academic work.

So, I kept it simple at first. I compiled a list of about twenty-five podcasts, all of them with a current events angle. I explained that some podcasts were political discussions and let students know whether they leaned left or right (Slate’s Political Gabfest). Some on the list were hard news and reported just the facts (PBS Newshour podcast). Some would tell a long-form story about something that may not be on the homepage of NYTimes.com but would be well reported and relevant (RadioLab). I asked them to select one or two podcasts and to listen to about 45 minutes per week. They were then required to write a one-page summary and commentary on anything they took away from that episode.

The results were delightful. Each Friday my students would bound into class, excited to talk about the episode they listened to. We would spend about 10-15 minutes sharing summaries, which also allowed the class as a whole to absorb yet more news.

Students were fascinated by what they had learned, but I also wanted them to see how this new knowledge was now a powerful tool they could use in their writing. After they finished sharing, we would talk about sample writing prompts and how we could use the news examples from that week to strengthen an argument on that topic. Naturally, it didn’t work precisely for every prompt and every podcast. But over the course of weeks, students started to realize they knew much more about current events in detail and could use those details to create measured arguments on complex topics. They felt empowered, and their writing became much more detailed.

Before their exposure to podcasts, even my strongest students would generalize or give very thin examples, which made their writing sound uninformed. Now, their writing had a sophistication to it.

As an added bonus, students seemed relieved they were being asked to listen rather than read this information: “It’s makes doing the dishes so much easier!” one of my students exclaimed and another liked that she could multi-task by doing this assignment while out on her cross-country run. I found that many of them began listening to podcasts on their own outside of the regular weekly assignment. I was giddy.

Once I had created a learning environment where podcasts were a familiar and typical medium just as, say, a newspaper article or a novel is, it was very easy to incorporate other brief listening activities. I also found that my students had a greater interest in nonfiction and the kind of long-form journalism you might read in The New Yorker. I started assigning reading that complemented the podcasts as opposed to the other way around. Reading circles developed around books like Brian Stevenson’s Just Mercy and 2017 Pulitzer Prize winner Evicted by Matthew Desmond.

As we approached the end of the term, I felt justified in my use of this assignment. So many students were using the conversational yet academic voice of podcasts. They wrote like little NPR hosts and used examples that were rich in specificity. They made connections between literature, news and the issues that they continue to care about. At the end of the year, not that I teach towards the test (no, not any of us, right!?!), my students weren’t thrown off at all by the listening portion of the Smarter Balance assessments. Best of all, I now receive emails that start “I continue to listen to podcasts a couple times per week (although most are about fantasy football/hip hop news), and I’ve begun to actually read recreationally” so I know many students walked away with something that continues to inform their daily lives as citizens and lifelong learners. 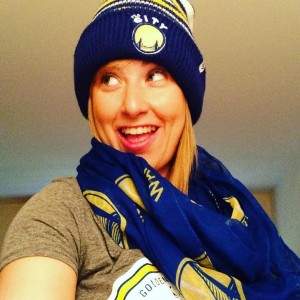 Kelley Hutchison is an English teacher at Amador Valley High School in Pleasanton, CA. She currently teaches AP English Language as well as junior and senior literature classes. When she's not asking students "What would Atticus do?" Kelley is usually chasing around her two-year-old son, gardening, or exploring the bookstores of Oakland with her husband, Chris.