Climate change is threatening the planet. It’s causing sea levels to rise, oceans to become warmer, forest fires to burn more wildly, freshwater supplies to dry up, and crops to wither. Yet one-third of all students in the United States spend only an hour of class time every year talking about climate change.

However, this is not the case here at American Canyon High School (Napa County, California). Here, the school’s science department students spent January and February of 2017 engaged in a project to save the earth.

The Physics and Preparatory Physics students learned about how climate change has increased weather patterns (extreme weather) and how drought in the West has increased the frequency and intensity of forest fires. These are some of the resources that were used to help students make sense of this issue: Evidence of Global Warming, The End the California Drought, Global Warming: The Physics of the Greenhouse Effect, and What is Ozone.

Laboratory teams of four conducted a series of NASA inquiry-based laboratories in order to learn the science of climate change. The NASA labs gave them greater insights into the processes that cause climate change. All labs utilized sensors made by Vernier.

In the NOAA lessons, the students took the NOAA Weather Quiz, which showed how the weather transports the products of climate change around the world. Then student teams of two applied their knowledge to researching the effects of climate change on different regions of the Earth. Some of the topics they presented were deforestation, greenhouse gases and melting ice caps. Here are some examples of student work: Forest Fire Behavior and Zika virus.

The Anatomy / Physiology students used resources like Scientist Tease Out Climate Change’s Role in Zika Spread and Effect of Air Pollutants on Health, students studied how the increase in greenhouse gases resulted in an increase in respiratory illnesses. They also analyzed how the increase in Earth’s temperature has caused longer warm periods in the tropics, which has allowed the Zika-carrying mosquito virus to spread to the United States.

The AP Chemistry students studied climate change and the acidification of the oceans, using KQED’s Clue into Climate Change and Ocean Acidification as references.

The STEM Club members used $996 in funds received from a James Cary Smith Community Science Grant (BAAQMD) to learn how to program the Raspberry Pi 3 computer. The students then built, coded, and calibrated these Raspberry Pi computers with a Sensly gas sensor hat and Astro Pi hat to collect indoor/ outdoor environmental air quality data in their community.

After completing the complex tasks mentioned above, sixty-four American Canyon High School students attended the 2017 Youth for the Environment and Sustainability (YES) Conference.

About twenty of the student who attended the conference gave presentations on their climate change projects using Google My Maps, a public service announcement format (PSA), a poster or a multimedia presentation

Every year in February the Bay Area Air Quality Management Board puts on the YES Conference to promote youth awareness of air quality and to show students how they can help clean the air. BAAQMD pays for transportation and food for the conference.

At the conference guest speakers spoke about their efforts in cleaning up the air and the environment. All the students interacted with other high and middle school students from the Bay Area. Throughout the day they went to workshops and attended presentations created by other students and designed to show what they had learned about air quality and climate change. This was a very empowering experience for them. Coming from a small community, they didn’t think that their voices would be heard.

If you live in the Bay Area, consider taking your students to the 2018 YES Conference. Last year, over 500 students attended and this year the conference organizers hope to attract 1,000!

In the upcoming school year, I will incorporate some Above the Noise episodes including Bloodsuckers! The War on Mosquitoes and Does Climate Change Cause Extreme Weather?

Also new this year,  both the Humanities and the Mandarin Language classes will be joining our project. The Humanities classes will focus on the devastating impact of American industrialization on the environment and the connection between the fossil fuel industries and climate change. They will then design cities that will meet the challenges of a changing climate while minimizing their carbon footprints and environmental impact. The Mandarin Language classes will be focusing on China’s impact on climate change, both good and bad.

I believe that this project was extremely effective both in terms of presenting scientific content to the students and in terms of informing the students about the real-world problem of climate change. I also believe that because of their work on this project, a large number of American Canyon Hgh School students can be counted on to spend much of their adult lives doing what they can to save the Earth. 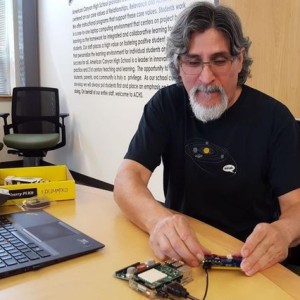 Dan Rosales is an experienced educator who currently teaches Physics and Computer Science at American Canyon High School in Napa, California. He is also a former SWAT Team member in the USAF, a former EMT II (ACLS), and a former Cardiac Monitor Technician for an ICU/ CCU hospital with a BSEE and M.A. in Physics. These experiences have given him a unique, renaissance view of the world and of how to teach science and technology. He has used this perspective to incorporate KQED Learn into his lesson plans to present scientific content.