Due to their significant emotional instabilities (I teach a special day class for middle school students who exhibit emotional dysregulations), I could anticipate my students’ reaction as I read them the project description. For this assignment, they would be tasked with picking a U.S. state, researching specific information about it and presenting the information through a Google slides presentation with a 25-slide minimum. I knew there would be some pushback with this last requirement, but you should’ve seen their faces!

My fight or flight response left me with two choices: duck for cover from imminent flying textbooks, or keep reading the project description. As I continued, I was interrupted by a sounding “What the **** did she just say?” Dante’s inquiry was immediately followed by a roaring consensus (there are only seven students in the class). At that moment, I knew that the next words out of my mouth would decide the fate of this project. I inhaled deeply and attempted to comfort them. “I know 25 slides sounds impossible, but you all are smart and capable of meeting this requirement. It will be hard, but we will do it together.” For most of them, it was the first time they’d felt like actual students. With this momentum, I propelled them forward; my endgame was that the work they produced would show them that they were not just students, but scholars.

My goal for this project was to lay the foundation of media literacy for my students. The first step was exposing them to the multiple academic computer applications available to them. In the media literacy world, this kind of introduction is known as an access building block. In this case, I was enabling my students to access a different mode of storytelling by using the Google slide presentation application. I knew that once they became familiar enough with the slides application, the project wouldn’t seem as daunting as it did on paper. (I try to keep this in mind when creating assignments and assessments.)

Like anything new, there were anticipated bumps along the way. My students were to research their states according to the project guidelines, but they were not allowed to use any paper, including for note taking. They  weren’t used to typing on keyboards, and often became frustrated at the length of time it would take them to type up their research notes. I predicted and understood that they’d be easily frustrated, so I intermittently implemented competition breaks to help ease the tension in the computer lab. The competitions were usually built around research. I would play a certain sound on my phone, signaling them to get into “search mode,” then I would give them clues as to what I wanted them to find online. These searches, which I made sure were culturally relevant to them, included finding lyrics to different songs and the specific dates of a championship sporting event. The only exception to the game was that they weren’t allowed to use Wikipedia as a resource. By the end of this project, the students were experts at finding random facts on the Internet (and loved to share them with me).

Another bump along the way was the overuse of copy and paste. My students quickly learned this handy shortcut as a way of getting information on the slide. So I set boundaries regarding academic integrity, and stressed the importance of being abiding citizens on the Web. I along with the classroom staff, used a strategy called the “no-look slide summary.” A teacher could, at any time, ask for a summary to any slide, and the student would have to immediately provide an oral summary of the slide without reading it. We would usually look for slides that had more than two paragraphs, and then ask the student to summarize. Once it was discovered that the content was a result of copy and paste, the student would work with one of the classroom teachers to summarize the content in their own words and then replace the pasted material. This process was rigorous for my otherwise media-illiterate students, but by holding them to high standards of integrity and academic excellence, they knew that we truly believed they could do it, and they rose to the challenge.

The presentation day finally arrived. The students invited other teachers, the psychologist they worked with, the school therapist and the assistant principals to attend. As the guests were entering the classroom, my students’ nerves were starting to show. As I prepared to give a motivational speech to help assuage their anxiety, I was interrupted by the same student who was initially outraged with the project expectations. His words moved me: “We’re all nervous, but we gone be nervous together, and we ‘bout to knock this out because we put in all this work. I’ll go first.” As Dante stepped up to the front of the class, I quickly stepped into the back room to wipe the tears from my face. (Yes, they’d definitely make fun of me.) The rest of the class applauded Dante as he cleared his throat to begin his presentation. He chose the state closest to him, California, and he started with the Rodney King era. As Dante continued his presentation, I observed how the students gave him their undivided attention, ready to offer support if Dante needed it. This attentiveness was maintained throughout every report.

Reviewing my critiques of each assignment, I was in awe of how personal the reports were. Dante chronicled California history using different social eras that he could relate to, while an obsession with waterparks was colorfully represented in another student’s presentation. It was these kinds of personal connections that distinguished their reports from the traditional poster presentation.

Upon reflection, I can honestly say that it was transcending to watch students’ confidence in their abilities grow as they sat down in front of their computers each day. By the week before they were to give their five-minute presentations, I was observing students inserting links to into slides, making songs about their chosen states, and analyzing the states by categorizing their slides into different eras. What I found most rewarding was that their initial fear of the technology, and all the obscurities that come with working with media, had been replaced with a sense of familiarity. Before this project concluded, students were suggesting that an interactive poster be the final assessment for the novel they were reading (which they did). I realized that the students were looking forward to the chance to utilize their new skills to create and produce more work. They felt like scholars. They had become so engaged in this project that my initial 25-slide minimum ended up being a 25-slide maximum.

If you want to learn more about using presentations in your classroom, take our free, online course Designing Presentations on KQED Teach. 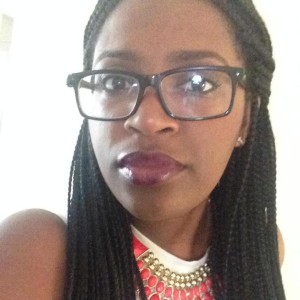 I am a product of the Peninsula, and I now reside in Oakland California. I am a middle school teacher currently working in San Francisco. I work passionately to fan the flames of literacy, while teaching students how to live their life with Persistence, Resiliency, Intelligence, Determination, and Empathy.