In 1984, July was designated as National Ice Cream Month, and the third Sunday in July as National Ice Cream Day. To celebrate the sweetest month of the year, learn about the science and methods of making ice cream with the following resources. Additional videos and interactive games can be found in PBS LearningMedia.

The Physics and Chemistry Behind Ice Cream Production
Did you know that ice cream is neither a liquid nor a solid but a complex colloid? In this informative podcast from Science Friday, a cookbook author and an artisan ice cream maker discuss the elements of making ice cream and the science behind it. Become an expert on the physics of freezing and learn how to create the correct ratio of fats, sugars and emulsifiers for that perfect, smooth ice cream texture.

The Science of Homemade Ice Cream
Anyone can make ice cream at home with just a plastic bag and some simple ingredients. This instructional video from CK-12 will guide you through this fun activity. Discover scientific facts of the ice cream production and learn why salt plays an important role in the process.

Behind the Scenes at Ben & Jerry’s Factory
Learn about the challenges of being a mechanical engineer at a large ice cream factory. In this video from Design Squad Nation, Ben & Jerry’s engineer Pete Gosselin talks about production machinery and shares tips for making smooth ice cream. 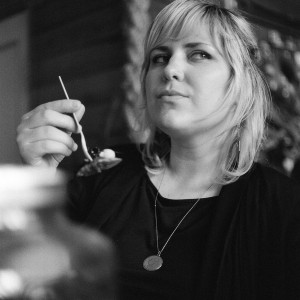 Masha Pershay is an associate video producer for KQED Arts. Masha got her start in media production in 2009, when she joined college station KUSF as a radio host. She holds a B.A. in Broadcasting and Electronic Communication Arts from San Francisco State University and a certificate in sound recording from City College of San Francisco. In her spare time, she's an avid record collector and a DJ in San Francisco's Italo disco DJ collective Galaxy Radio.