I am seeking to expand my Art 1 students’ capacities to collaborate and problem-solve as teams. In addition, I am determined to more deeply implement the practice of Art Integration, as a way of “Teaching in which students construct and demonstrate understanding through an artform (while) students engage in a creative process which connects an art form and another subject area.” (Kennedy Center’s Art Edge). My projects involve a great deal of student choice, student voice (Gallery Walks as forms of Peer Feedback), and mutual respect (collaborative teaming). Students also look to science, history and their own cultural experiences for inspiration.

In the project: Box Art About Systems, students work in teams to create a diorama or tableaux in a box that represents a system with which they are familiar. They look at the work of artists like Joseph Cornell and Betye Saar and learned about the scientific definition of a system :  “an organized group of related objects or components that form a whole. Systems can consist … of organisms, machines, fundamental particles, galaxies, ideas, and numbers. Systems have boundaries, components, resources, flow, and feedback” (National Academy of Sciences)

Their System Boxes were to emphasize Harmony/Unity as well as Movement/Visual Flow. Their Understanding Goals include:

Based on this mutual understanding, the whole class brainstorms examples of familiar systems. Teams of 2-4 people are formed that have to come to an agreement on a system to investigate and represent in their own box art. The piece was to include features of that system (boundaries between what’s inside and outside, component parts, how things work together, etc.).

Once finished, they give their boxes titles and participate in a Gallery Walk in which they comment on each others’ projects, citing specific Principles of Design from a Menu of Compositional Qualities – which students were expected to incorporate in their groups’ System Boxes.

In the end, the systems they chose were more diverse than I could have imagined – a crime scene investigation, cafe culture, a teenager’s bedroom, the city of Paris, the Civil War, as well as a coral reef and the Sonora desert (to name just a few…)

The Natural World as Cultural Metaphor

As we entered March, our next unit on print-making began by looking at the work of Oakland-based artist, Favianna Rodriquez. During and after viewing the KQED Art School video, Printmaking with Favianna Rodriguez, students responded to the following questions in their accordion journals:

In her video, Rodriguez explains how she is inspired and influenced by Chicano art movement and by features of the natural world.  In particular, we focus on how she discovered and landed on the metaphor of the monarch butterfly in her series “Migration is Beautiful”.

In this project (as in much of my pedagogy and curriculum), I encourage students to examine how the natural world and human culture aren’t as separate as many initially believe. Indeed, many cultural traditions have grown out of humans’ observations and curiosity about nature. Using Linoleum Prints and symbolic color, students incorporate features of the natural world as metaphors for their own culture and cultural values. Students are expected to:

After a discussion and whole class brainstorm, individual students are asked to choose a subject from nature (animal, forces, plants, etc.) that symbolizes or stands as a metaphor for their own culture and values. Students are provided with resources to help them research that subject – its history, characteristics, etc. They take notes and make sketches about it, and eventually make a finished 6”x6” drawing of that natural symbol, based on photos and/or sketches. Several Elements of Art are at work here: Shape, Line, Value, Color, and Texture . As a goal, the drawing should have clear lines and contrasts in values from light to dark (2-3 areas of distinct tones).

Our Criteria for excellent Nature-Culture Prints include:

Students are also asked to write write responses to the following reflection prompts:

And, although this project is still in progress as of this blog’s publication date, students are totally invested and their responses are often insightful and endearing:

“I chose a turtle, because I think it’s a calm,happy creature, and it’s printed on blue for the ocean.”
“The shark is printed on red to symbolize blood in the water.”
“The panda is serenity and it’s lazy – like me!”
“I’m a penguin, ‘cause I waddle.”
“I like pandas because they’re big and jiggly – like me. The green is for bamboo.” 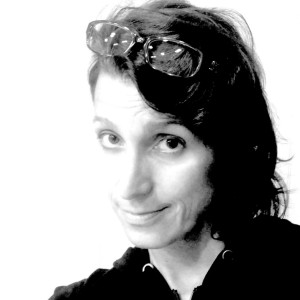 Kimberley Campisano is a San Francisco Bay Area artist and educator. For most of the past 20 years she has been a high school classroom art teacher as well as an instructional coach and curriculum developer. (integrating Art, Science, and Literacy …STEAM!). Formerly with San Francisco Unified School District (SFUSD), Kim now teaches Art1 and Digital Imaging at Washington High School in  Fremont Unified School District (FUSD). She has contributed to the development and dissemination of secondary art and integrated curriculum for KQED’s as well as several Bay Area museums. A practicing artist, Ms Campisano works in interdisciplinary media and installation. She received her Master's Degree in Fine Art from John F. Kennedy University and lives in Oakland with her husband, Jason and rescued Pit Bull, Dumpling.