Ask “what role should emotions play in critical thinking?” and you get an unsurprising response from almost everywhere: They shouldn’t. This response comes from a wide variety of sources ranging from Internet crowdsourcing favorite Yahoo Answers – “emotion severely HAMPERS the critical thinking process as it clouds our judgment to fact and reason” to the Academic Journal Teaching of Psychology – “critical thinking avoids emotions and emotional reasoning.” Recently, I have questioned this view that feelings have no place in critical thinking.

In the fall, a beginning teacher asked me why emotions didn’t belong in the critical thinking process and I couldn’t come up with an answer I actually stood behind. The more I thought about it, the more I realized that I didn’t see emotions and critical thinking as two planets orbiting different suns. In fact, often critically thinking about an issue leads us to have big feelings about the issue. The reverse is true as well. Big feelings often lead us to think critically about an issue. So, feelings and thinking are very connected. This connection was on display in my classroom throughout a debate and writing assignment on Felon Disenfranchisement. Emotions played a central role in framing the debate and contributing to the students engagement with the issue.

Earlier this year, during a unit on voting, my class looked at this blog post from KQED’s The Lowdown titled States Where Felons Can’t Vote. The students quickly noticed that the rules about felon voting vary significantly from state to state. For example, Maine lets felons vote even while they are in prison while Florida denies the vote to prisoners, parolees, probationers, and ex-felons. My students asked great questions, “Can ex-felons from Arizona just move to Illinois so their right to vote will be restored?” And they gave great responses, “Well, only if you, as an ex-felon, have the money to move across the country and are willing to leave your family and community. Seems like doing too much for a chance to vote.” This discussion led into table debates on the topic “Should there be a national law banning felon disenfranchisement?”

I love this debate lesson and do it almost every year. This year I updated this lesson with my new focus on asset-based thinking strategies that I outlined in a previous post, structuring the lesson with these strategies in mind: A) supporting claims with evidence, B) considering different viewpoints and perspectives, and C) wondering and asking thoughtful questions. Interestingly, as the debate unfolded, I noticed that a completely different thinking strategy came to dominate my students approach – identifying patterns and themes. While they certainly used strategies like asking thoughtful questions and considering different viewpoints, they were most engaged in the process of unearthing key themes such as how it felt to be prohibited from voting, or how it felt to have someone who has broken the social contract vote within your community. And this strategy, this way of thinking, emerged from my students’ emotional engagement with the topic.

It feels more honest – and more instructive – to not only acknowledge that their feelings are part of their equation as they think about these issues, but to encourage them to reflect critically on how they can engage their own emotional responses and feelings in combination with academic, evidence-based analysis.

The students arguing for a felon’s right to vote articulated that denying them a vote makes the felons feel excluded from the community when they return. They are “half citizens, kept on the sidelines of the community.” They don’t really belong. The students who argued against a felon’s right to vote used “betrayal” as their central theme. The felon “violated the trust of his/her fellow citizens” when he/she broke the law. “You can’t just expect your community to trust you again and let you take part fully in the community relationship.”

And it worked. The evidence for each side wasn’t framed as a set of rational facts to help you win the debate – the more facts you stack up the better. The table discussions emerged from and were framed by emotional arguments – it’s upsetting to feel excluded or it hurts to be betrayed. One set of students focused on felons being “locked out of their own society” and how humans respond when they are “basically invisible” to their community. Another set of students focused on how when people betray and “disrespect their community and people, [they] have to pay. [They} have to pay with something big, like voting.” The students didn’t stop there. They supported these frames, based in emotional reasoning, with evidence and facts based in academic evidence. They made connections to other groups of people such as legal residents who are also treated as “half citizens” as well as made connections to American history, “whatever happened to no taxation without representation” and John Locke’s ideas of a social contract.

Age and maturity come with many benefits including perspective and the ability to manage setbacks and recognize when they are not the end of the world. However, creating this emotional distance can be a loss, too. The energy and passion and BIG FEELINGS of young people are effective and beautiful for framing issues of justice. Emotions and emotional framing can assemble and organize all the evidence in a way that makes someone care. It did for me that day. I stopped counting the facts the students used as they made their points and I pictured the humans who were living these facts.

Months later, on the final exam, I asked the students an essay question about voting in today’s society. Although the question did NOT specifically mention felon disenfranchisement, many of the students referenced this debate, they referenced the emotional frames, and they used these to answer the question thoughtfully.

Now when I teach critical thinking I try to figure out how to communicate that emotions can and do play a role in thinking while balancing that idea with the view that emotions cannot be the sole basis for critical thinking. More recently, my students and I practiced this more nuanced approach as we examined the rights students have on school campuses and talked about managing personal finances. It was refreshing to admit that feelings play a role in deciding how people will spend and budget money. It feels more honest – and more instructive – to not only acknowledge that their feelings are part of their equation as they think about these issues, but to encourage them to reflect critically on how they can engage their own emotional responses and feelings in combination with academic, evidence-based analysis. Doing so can amplify their power as critical thinkers. 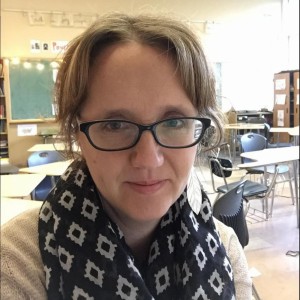 Nancy Ogden is a high school social studies teacher at Hayward High school in the San Francisco's East Bay. In addition to teaching high school, she teaches Social Studies Curriculum and Instruction courses in the teaching credential program at Cal State University East Bay. Outside of teaching, she is a mom to two energetic and curious little boys.