One of my major goals in our science classroom is to connect our work to the daily lives and priorities of students – making what we do in class personally relevant and engaging. I also strive to broaden students’ ideas about who scientists are in ways that emphasize the diversity of purpose, talent, and backgrounds they possess, and to connect the work of science to social progress and human empathy. After spending time together investigating different types of scientific research projects and scientific and engineering design principles, we used KQED’s E-book series, Engineering Is… (http://ww2.kqed.org/education/e-books/) as a way to connect our technical, content driven work back to the needs of real people and present day communities.

The goal for this three day mini-project was for students to spend two days exploring one of the four E-book resources about the following topics: creating an efficient cook stove, designing an origami microscope, specialized research techniques in the deep ocean, and an affordable clean water filter. For the final session, student groups would then use some sort of performance to share their story with the class. My only rules were to engage the audience with the content, and to stretch themselves beyond traditional slide presentations and book report type summaries.

Recently, I had been introduced to the idea of soundscapes as a way for students to tell stories in their learning environments. After creating my own and exploring resources online, I decided to include the idea of using soundscapes to present a story as an option for our mini-project. I enthusiastically introduced the idea of using a soundscape as a creative presentation possibility and gave a short description of my work with them and how much I had enjoyed researching the ways people use sound to tell stories. I announced that I was happy to show some examples and talk more about my experiences if anyone was interested. One by one during the brainstorming and research sessions, groups came up to ask me more about soundscapes. I showed them the storyboard I had created for my group soundscape and described the sounds we used for each phase of the story I had drawn. Although the story I used as an example was a  very simple one, the students were really interested in the idea of incorporating sounds into their stories. They immediately began asking if they could experiment with sounds made from objects in the room or to go outside to record sounds of their own to see how they might fit with their presentation ideas.

On the day of presentations, I had no idea what to expect and sat down to enjoy the show. Each group had five minutes to present, with two groups presenting each of the four E-book stories. My thinking was that by hearing each story twice, students would be able to discuss the science and engineering practices in more depth and that each presentation would have unique strengths that could engage the audience and specifically for my students working on their language skills, broaden their understanding.

The first presentation happened to be a soundscape. After we all closed our eyes, the student group led us through a narrated script with sounds coming from all around us, setting the scene where a child in an outdoor environment would need to go to the doctor and how differently that would look here in the U.S. in comparison to other locations eventually leading to the need for and invention of the origami microscope. As the performance ended, the audience members began clapping even before we could all open our eyes! What was even better was the second group to share out the same story used a skit format that allowed us to revisit the material from a different angle. Almost every group throughout the day used sound in some way during their presentation.

The soundscapes, with their singular focus on one sense, with the added appeal of novelty and mystery, were by far the most powerful and popular approaches. Some soundscape groups recorded sounds and played them for us, asking us to then construct a chronological list of the sounds and work together to predict the storyline before sharing out the information in the role of science researchers. Others combined a sound story with a follow up skit or class discussion. Students created duct tape versions of the cook stove, role played as researchers describing their water pump invention as a scientific conference, performed a puppet show, created skits set on land and in the ocean, and created vibrantly colored storyboards of their soundscapes.

The following class session, we spent time checking in about what made this mode of communication so special to them and how we could utilize soundscape strategies in other ways at school. We also compiled a list of the skills we felt engineers needed and compared it to the list of skills we created that described their effective group collaborations. Not surprisingly, there were many overlapping ideas. From there, we were able to dig deeper into the role of engineering design in solving world problems and the many types of engineering and product design positions that are available for students to explore and expand as an interest and potentially, a career.

By getting my students to consider presentations as a creative endeavor, I’m helping to broaden their ideas about what it means to communicate, envision, and collaborate – all skills that are essential in scientific research and engineering design. Additionally, the process encourages and requires diverse talents, skills, interests, and points of view which further supports all of my students. I’m looking forward to hearing from you about the ways you have used the KQED E-book resources and other strategies your students have used to share their understanding in creative ways! 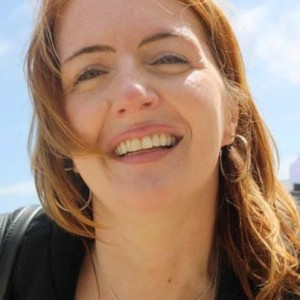 Maria is a high school science teacher with over twenty years of classroom experience.  In addition to her classroom work, Maria is a Teacher in Residence at UC Berkeley, a member of the CTA-Stanford University led Instructional Leadership Corps, and recently finished a year long position as an NEA funded Better Lesson Master Teacher in Biology Fellow.   You can see many of her standards based biology lessons on the BetterLesson website.