Why build a home if you can grow one? San Francisco-based artist Phil Ross has spent the last 20 years developing sustainable materials from mushrooms.

Although Ross originally cultivated mushrooms as food, he quickly became fascinated by their potential as an artistic medium. He started growing sculptures and other structural forms out of fungus. And through a process he calls “mycotecture,” Ross crafted furniture, interlocking blocks, and a small tea house.

“It just seems like an inevitability that this is going to be a popular material,” said Phil Ross, Chief Technology Officer of MycoWorks.

But what started as an art project has now turned into a business venture. At the end of 2013 Ross co-founded the startup company MycoWorks as the first step on his quest to “mycotecturize the world.”

“This stuff can be used to replace a lot of engineered woods, a lot of plastics, a lot of materials that we can’t even think of,” said Ross, who is now the company’s chief technology officer. “It just seems like an inevitability that this is going to be a popular material.”

Ross’s creations start out as bits of reishi mushroom, an edible fungus commonly sold as a health supplement. But he’s not growing the familiar fruiting bodies you’ll find at the store. Instead, Ross relies on the mushroom’s root structure, known as mycelium, to form the substance of his materials.

Feeding on agricultural waste such as sawdust or corn husks, the mycelium forms an interwoven network that can be molded into practically any shape. Growing the fungus in rectangular boxes creates “mycobricks.” More elaborate molds can be used to produce chair seats or decorative panels. Depending on the final density of the material, this process can take anywhere from a few days to a couple of weeks.

The material is then dried out with fans and baked in an oven to kill the fungus. “It’s mainly so that when you have a brick, it’s not going to come alive again and infect your house and start to eat it,” said Ross.

The material is also self-binding and flame resistant, negating the need for toxic glues and flame-retardant chemicals. Unlike most synthetic products, mycelium materials can be created without petrochemicals and are completely compostable.

According to the artist, his creations smell less like a slice of mushroom pizza and more like a walk in the woods.

While edible mushrooms can be polarizing, Ross said, “it doesn’t smell like your typical mushroom.”

“That’s the first thing that people do. They grab [the material] and they smell it,” said Ross.

But according to the artist, his creations smell less like a slice of mushroom pizza and more like a walk in the woods.

MycoWorks isn’t the only company working to commercialize mushroom-based products. For the past few years Ecovative Design has been producing packaging materials made from mycelium.

Ecovative’s grow-it-yourself kits have also allowed artists to get creative with the material. Recent projects include colossal, bio-inspired towers installed in the heart of New York City and mushroom-shaped table lamps called “mush-lumes.”

And fungus isn’t just for building. Edible mushrooms are also being used to break down condemned wooden houses into compost.

Both MycoWorks and Ecovative are pushing the limits of what the fungus can do. To this end, Ross has teamed up with Sonia Travaglini, a doctoral researcher in mechanical engineering at the University of California-Berkeley.

“My research so far has been some of the first characterization of these materials,” said Travaglini. Currently she is experimenting with composites that meld the mycelium with more conventional materials. One creation combines the lightweight durability of mycelium with the tensile strength of bamboo.

And by manipulating growing conditions, the same mushroom mycelium can form everything from lightweight foams to durable bricks as tough as concrete. “Because it’s a natural material, what we feed it and how we grow it chooses how the properties come about,” said Travaglini.

Eddie Pavlu, CEO of MycoWorks, plans to develop engineered wood alternatives, cork-like materials, and polystyrene-like foams from the mycelium material. As they scale up production, Pavlu says these substances will be cost competitive with conventional materials such as particle board.

“In the next year or two we could be replacing certain parts of buildings,” said Pavlu, though he points out that updating building codes to allow the new materials could take some time. For now the company is focusing less on heavy-duty construction materials in favor of products that won’t require lengthy approval processes.

“Looking further out, 10 to 20 years from now, I see not just construction materials, but I see a replacement for plastics,” said Pavlu. Ross agrees, and believes that one day many things — everything from computers and car parts to sports gear and spaceships — could be grown from mushrooms.

“I think the sky’s the limit,” said Travaglini. “Or rather, the mushroom’s the limit.” 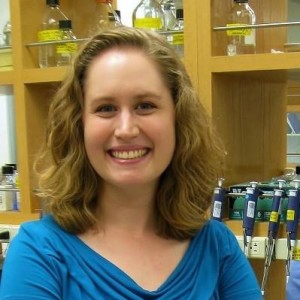 Liz Roth-Johnson received her B.A. degrees in Molecular & Cell Biology and Music from UC Berkeley and recently finished her Ph.D. in Molecular Biology at UCLA, where she studied early development in fruit flies. Outside of the lab, Liz co-founded the K-8 science and engineering outreach program BEAM at UCLA and has worked extensively with the public outreach program Science & Food. Liz is delighted to be joining KQED Science as a 2014 AAAS Mass Media Fellow.