Would you believe we discovered the planet Neptune only one year ago? Weird; I seem to have heard about this planet all my life—it was even my favorite planet at one point, back in childhood. What’s this paradox?

Well, not a paradox—just semantics. It has been one year since Neptune’s discovery. One Neptunian year. It takes Neptune, the most distant known (official) planet, about 165 years to orbit the Sun one time.

Doing the math backward, 2011 – 165 = 1846. Neptune was officially discovered on September 23rd of that year in a sort of virtual team effort-slash-international-rivalry extravaganza by at least three people. (To be nit-picky, it was actually July 12th when Neptune completed one Neptunian year since its discovery, since the Neptunian year is a couple of months short of exactly 165 Earth years….)

Usually, the discovery of a celestial object is credited to one individual: the first to spot it through a telescope. Sometimes there is battle over the credit because two people may have spotted the object around the same time, and documented proof of who found it first is needed to settle the debate, or lack thereof to let the controversy go on.

But Neptune was the first planet to be discovered mathematically, based on observed perturbations in the motion of Uranus (Uranus, incidentally, was the first planet to actually be discovered; it’s difficult to say that any of the other planets were “discovered” in the conventional sense, as all of them—Mercury, Venus, Mars, Jupiter, and Saturn—are naked-eye objects, and so have been available to human eyesight since human eyesight was invented).

In Neptune’s case, in France and in England, Alexis Bouvard and John Couch Adams, respectively, each deduced that Uranus’ orbital perturbation was caused by the influence of another as yet undiscovered planet. Another Frenchman, Urbain Le Verrier, mathematically predicted the position of this unseen lurker, and German astronomer Johann Galle turned a telescope to the predicted position, finding Neptune less than a degree away. Eventually, credit for Neptune’s discovery—or at least the process of discovery–was divvied up among the group.

Why was Neptune once my favorite planet in childhood? Well…because it’s blue, of course! Just as good a reason as any, and blue was my favorite color. Like its slightly larger near-twin, Uranus, Neptune’s upper atmosphere is made mostly of hydrogen and helium gas, but the presence of methane tints it blue. The thick atmospheric shell is believed to extend downward 10 to 20 percent the distance to the planet’s center.

Deeper down is thought to exist a mantle containing significant amounts of volatile materials, like methane, ammonia, and water. This hot, dense, high-pressure fluid shell might be thought of as an “ocean” more than an atmosphere—although the distinction between gas and liquid is blurred by the extraordinary temperature and pressure of the material (taking an extreme example of what I mean, even the Sun’s core, with a density a hundred times greater than liquid water on Earth, is considered a gas–or plasma–by virtue of its great temperature).

Nevertheless, sometimes Neptune, and Uranus, are referred to as “liquid giants”—or even “ice giants”, though it’s difficult for me to reconcile the term “ice” with the multi-thousand degree temperatures deep down inside these worlds….

Under all that stuff, Neptune’s solid core, made of rock and nickel iron primarily, has a mass not much greater than planet Earth—as if, at the center of this giant piece of liquid confection, there exists a crunchy center, a shrouded planet Earth. What a gem! And maybe literally, as it is speculated that deep inside the planet’s mantle, carbon atoms coming from methane may be squeezed by the pressure into diamond crystals, which “rain” down upon the rocky core. Neptune, planet of riches…if only….

At Chabot, we’ll be having a Neptune’s First Anniversary since Discovery celebration on that date, September 23rd. Hope you can join us! 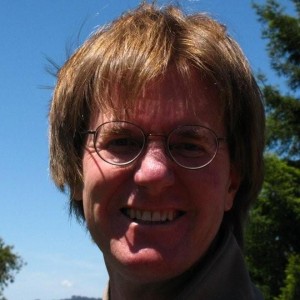